Yesterday AMD not only released the Ryzen 3000 series, the company also released two new graphics cards. I guess they didn’t want to make the life of reviewers too easy. 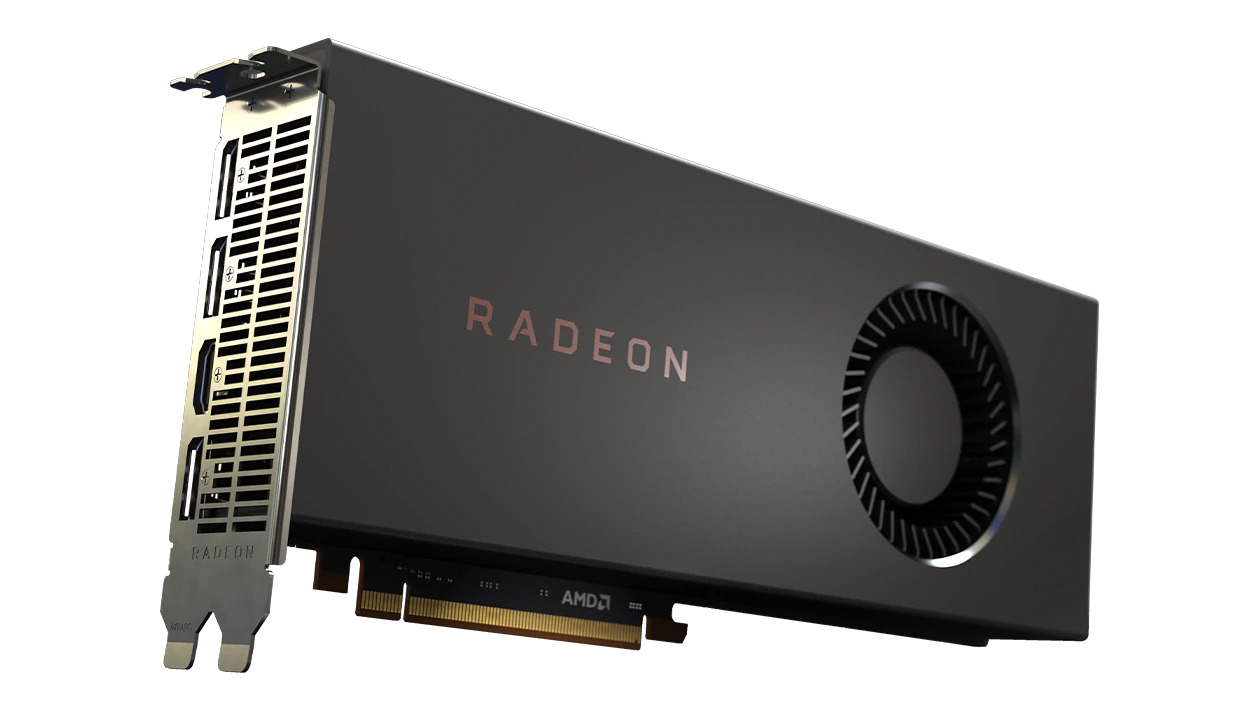 Those two cards are:

And to everyone’s big surprise those cards are actually good and priced competitively.

Why is that surprising? It’s because of AMD’s recent track record with gpu launches. Over the last years the company had a dual strategy: Releasing iterations of the Radeon HD 7800/7900 cards (that were high end in 2012) and at the same time placing new experiments on the market. The first part of that strategy worked somewhat: The current iteration of the Radeon HD line is the Radeon RX 500 series, and the RX 570 and RX 580 are great cards – at the lower end of the market up to 200 bucks. While the second iteration, R9 290X, was still a high end card, its current version – the RX 590 – sits at position 17 of the meta benchmark. Nvidia’s stronger cards play in a different league.

At the same time the experiments and efforts to place a card at that level failed. Fury still tackled the high end (at that time defined by the GTX 980 Ti), but was a bit behind. It took a while till a successor was released. Vega was hyped a lot, but suffered from high energy usage, being loud at load and being unavailable during the crypto bubble. And finally the recent Radeon VII was slower than cheaper alternatives by Nvidia. 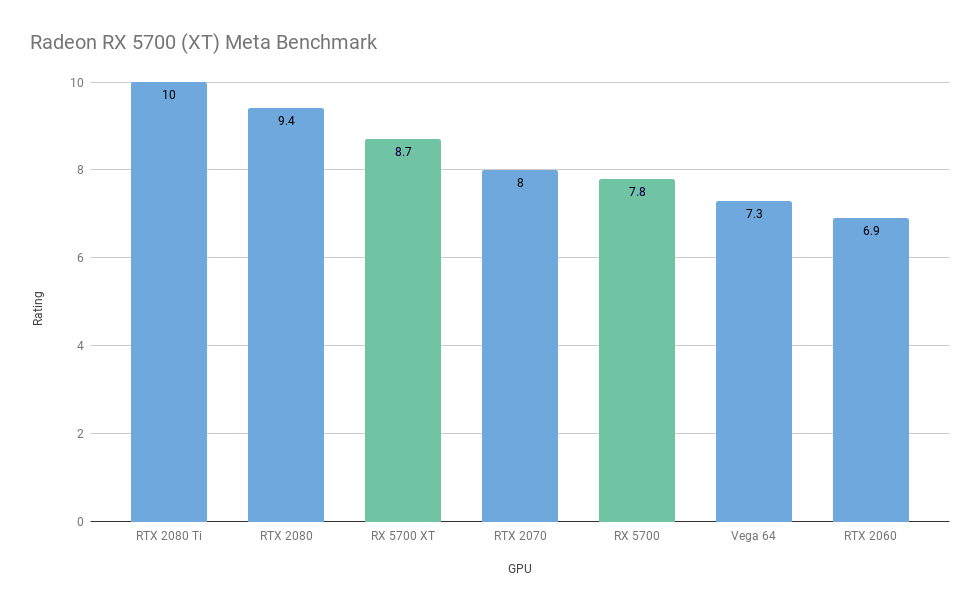 Please check this comparison page to see which games and reviews went into that rating.

Missing in that benchmark are the RTX Super cards. They are not in there because they are not released yet. But benchmarks are out, and it’s clear the RTX 2060 Super is at the performance level of a RTX 2070 and the RTX 2070 Super a bit below a RTX 2080. Which in effect means the RX 5700 and RX 5700 XT are still competitive, in absolute performance and price/performance.

One drawback is the cooler. Till now only a reference version is available, and the blower style cooler gets loud under load. It seems to be better than at the Vega release, but it is still not ideal. Partner cards should fix that in August.

The newly released Ryzen 3000 series arrived with a bang. So many reviews, so many good results. The bulk of the reviews focused on the Ryzen 9 3900X, Ryzen 7 3700X and Ryzen 5 3600. Only two benchmarked the Ryzen 5 3600X, in a very limited way. So what does the Internet say about the performance of AMD’s new processors? 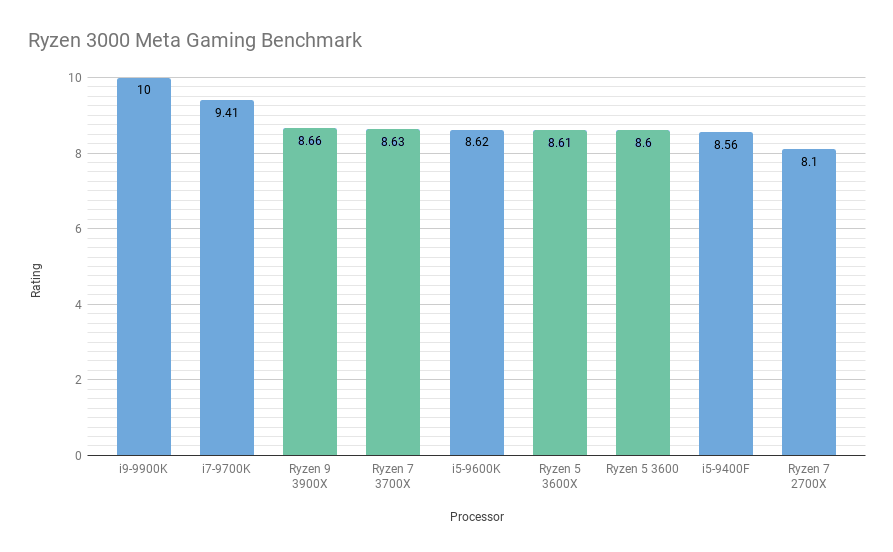 Please check the comparison page to see exactly which benchmarks were used for this rating.

But more than ever the Ryzen 5 is the more attractive option. The i5-9600K it is the more reasonable option for gamer anyway, and that’s the processor Ryzen is now matching, with a 12-thread processor. That makes for an attractive offering. It will be interesting to see where the 3600X lands when more benchmarks get released, so far it is underrepresented and its positioning might still change.

So gaming is not even a weakness anymore. But those processors are still, like Ryzen 2000 and 1000, especially nice because of their software performance: 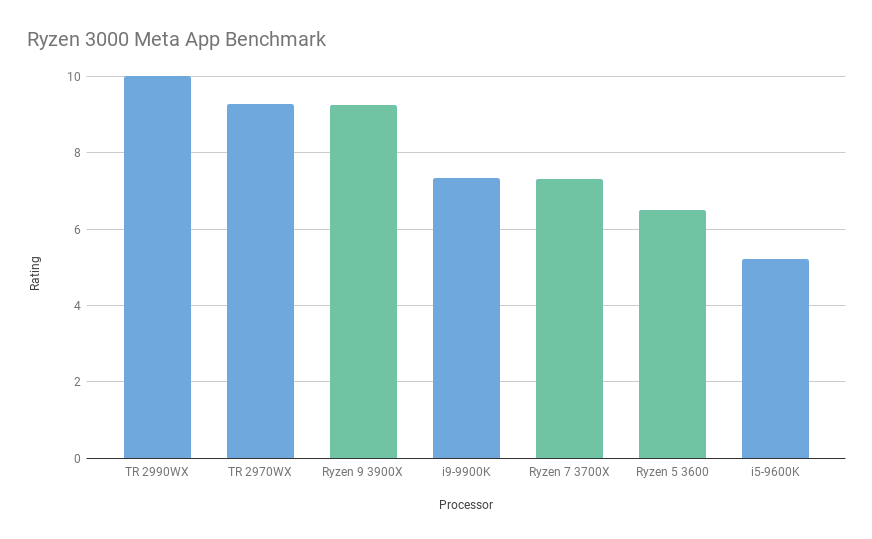 Please check the comparison page to see exactly which benchmarks were used for this rating.

The i9-9900K is still a strong processor in that discipline, but it is not stronger than the Ryzen 9 3900X. And the cheaper Ryzen 7 3700X is very close, making it the better option for a new PC.

So this is the situation: If you want the fastest performance in games the i9-9900K remains the top processor. But one level below Ryzen is now stronger than ever, with Ryzen 5 3600 and 3600X being valid alternatives to the saner i5-9600K gaming processor. In most other software workloads there are three reasons to get Ryzen: The Ryzen 9 3900X, to get something stronger than the i9-9900K, the Ryzen 7 3700X, to get something cheaper at the same performance level, or the Ryzen 5 3600(X), as a budget option that still is stronger than the i5s.

For those wondering, Nvidia’s new graphics cards are on my radar. The cards are not available yet, that’s why they are not in the system. But I already collected some benchmarks to be prepared next week.

The Super video card launch packs more punch for a refresh than we would typically expect, but it also moves the stack around in interesting ways. The 2060 Super has relatively large gains in performance that put it close to the original RTX 2070 in most instances and the 2070 Super is very nearly a 2080, although not quite. It has moved the 2070 SKU up to a TU-104 die from TU-106, though, and that’s significant.

That said, the firm has form in delivering great products on the eve of a new AMD launch - the GTX 980 Ti’s arrival ahead of the Radeon Fury X, for example. Regardless, the end result is a brace of GPUs (with one more to follow) that take the existing Turing cards and power them up, making them more performant while undeniably delivering more value.

So really attractive cards that will probably end up in recommended builds as soon as they are really available. I’ll add meta benchmarks results as soon as possible after they reach the market in a separate article.

Update 27.05.2019: Today AMD announced the real Ryzen 3000 specs and they are nowhere close to what was claimed below. There are no additional cores for Ryzen 5 and Ryzen 7, there is just a new Ryzen 9 3900X with 12 cores. Ryzen 5 and 7 just get a small clock improvement and a larger L3 cache. The 65W TDP of the Ryzen 7 3700X is interesting. Anandtech reports:

If what is listed on these shop sites is true Ryzen 3000 will be an incredible release. But first the links:

This would result in these specifications:

If the data is correct this would be huge. Two reasons:

1) The core count is a jump up. So far, Ryzen 3 had 4 cores, Ryzen 5 had 6 and Ryzen 7 had 8. Now Ryzen 3 would have 6, Ryzen 5 would have 8, Ryzen 7 would even move to 12 and the Ryzen 9 3800X would move into Threadripper territory with 16 cores. It can be safely assumed that all these processors would feature double the threads. This means that if AMD manages to keep the prices close to the prices of the current generation, already because of the jump in core count these offers would be very attractive.

But 2), AMD also raised the core clock significantly. With new turbo clocks of up to 5GHz Intel’s i5-9600K, i7-9700K and i9-9900K would no longer be the only ideal option for high FPS gaming. And also many regular applications would profit a lot from the higher clocks.

I would not believe these numbers if it were a regular leak. But specs on shop sites tend to be correct, and it would be not the first time specifications of a new product get published like this by accident. Let’s hope it’s true.

Nvidia released the GTX 1650 today and it turned out to be a bad release. The $150 card performs worse than the cheaper RX 570, it is only a small step up from a GTX 1050 Ti, as evident in the direct benchmark comparison. But it’s in our system now and you can add it to your build if you want.

Cases and cpu cooler got a bunch new filter option, both when creating builds and when browsing the parts lists. Cases can now be filtered for their fan mounting and radiator support, how many 140mm fans can be added for example. And cpu coolers, which had almost no filter option so far, can now be filtered for height, socket support, and even radiator length and cooling type.

Those last few filters might be surprising because AIO coolers were missing so far. Since air coolers were till recently always the best option for budget optimized build, AIO coolers were just not interesting for us. But with the i7-9700K and i9-9900K there are now consumer processors on the market that get hot enough to make AIO coolers relevant, they are basically being needed to allow overclocking of these processors. That’s why AIOs got added, with full compatibility checks.