The Acer CB242Y is a 24” IPS monitor with support for 75Hz, FreeSync and motion blur reduction. It is part of the rather new budget series CB2, the CB242Y with its various subvariants is the cheapest model. Its price is at around $130. Too cheap to be any good? 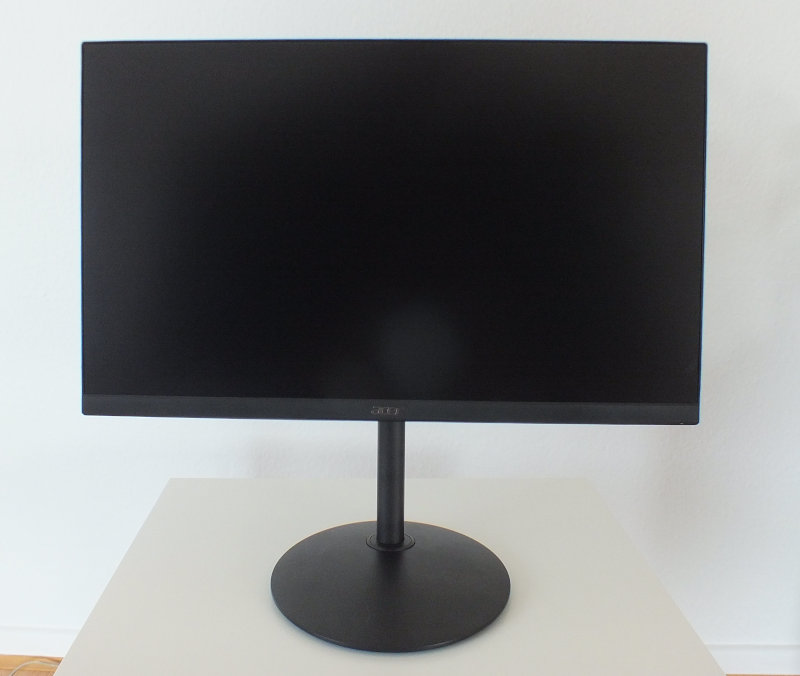 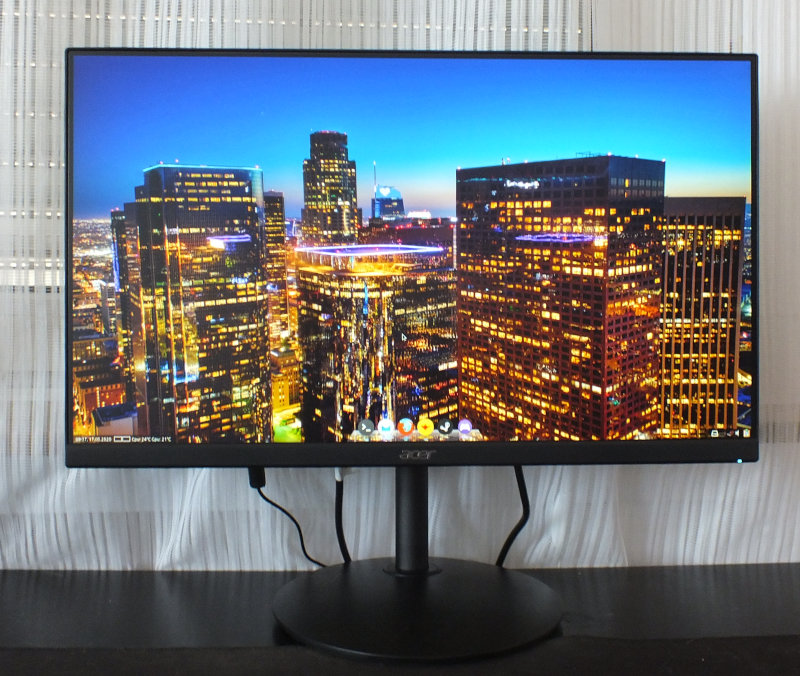 According to Acers model page, the CB242Y bmiprx (SKU: UM.QB2EE.001) I have in front of me does not exist in the US. But in some european countries it is right now the only available variant. Main difference to the bir and bmirx that are available in the US is the display port it has, less common in budget monitors than (also included) HDMI. Next to the display inputs is a sound input, as well as a sound output. There are integrated speakers according to the specs, but so far I did not get them to work.

At the outside, there is a lot of matte black plastic, apart from the bar of the monitor stand. My unit had some imperfections at the corners, mainly visible in light reflections. Not optimal, but not a real problem. 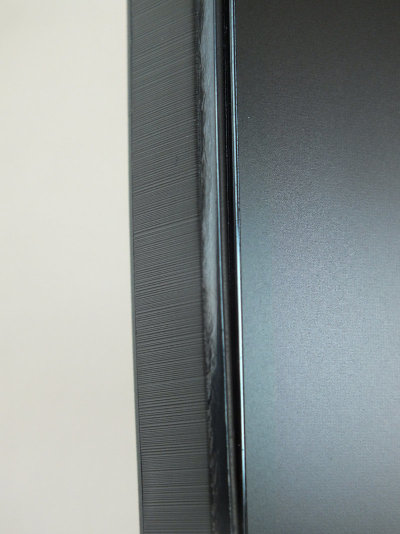 Acer uses a very nice mechanism for the stand: It allows the screen to be adjusted in height, be tilted and rotated into portrait mode. The round disk at the bottom is heavy enough to provide stability, but it is a bit larger than ideal for small desks. 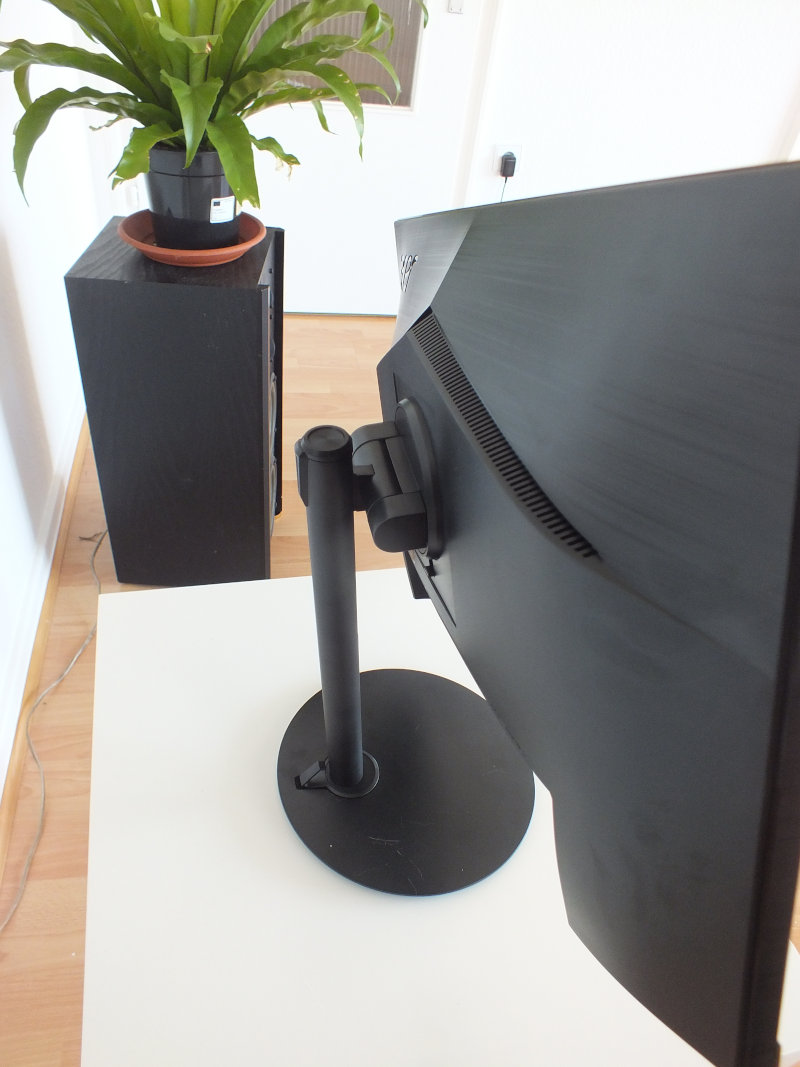 Bezels are slim at top and the sides, at the bottom there is a bigger chunk of textured black plastic. It is a cheap solution that looks nice, it gives the otherwise minimal design some character. Bottom right a small LED shines blue when the monitor is on, sadly there is no option to deactivate the LED.

Settings can be adjusted in an OSD menu, the buttons and a mini joystick control are at the back of the monitor. A big step up from monitors with only button controls. The OSD menu itself is cleanly structured and contains all settings one would expect. Let’s step through them:

The first picture menu has apart from the usual brightness and contrast settings also a black boost control, and the less common options blue light, ACM and super sharpness. Blue light reduces the blue light level, to 80%, 70%, 60% or 50%. That might be nice if you do not already use software like f.lux, redlight or the Windows integrated night light feature. ACM is Adaptive Contrast Management, a mechanism that adjusts contrast on the fly. It does not seem useful to me. Super sharpness works like a TV post process filter, it’s striking how well it works for some graphics and how bad for text.

The color menu and the audio menu contain no surprises. Color allows for adjusting color and gamma levels, audio the volume.

The performance menu is where it gets interesting again. Overdrive, FreeSync, VRB and Refresh Rate NUM are listed. Overdrive is only adjustable when FreeSync is off. The normal overdrive level has no noticable drawbacks, the extreme level leads to lots of overdrive artifacts. FreeSync worked without issue, from 50 to 75 FPS. Specified is 48 FPS as lower range, that it stopped 2 FPS early might be specific to my test setup. VRB is Visual Response Boost, motion blur reduction. Activating it reduces brightness by a lot, disables FreeSync and adds noticeable modulation to the output. It is supposed to improve motion clarity and it clearly does, but also has some negative effects discussed below. Refresh Rate NUM paints the refresh rate in yellow at the top right, which does not seem very useful to me.

Overall, it looks nice enough, the monitor stand is very good and the feature set is okay if you look for a FreeSync monitor that has the necessary color/brightness/contrast settings.

Image quality and daily use

So it has Freesync and some additional settings, the outer shell is okay, but how is the panel?

At first, the subjective impression when turning it on was very positive. The image looked bright and colorful, also next to a known good Dell monitor and a known bad old TV. Then I used the Lagom monitor test pages to confirm my impression. Keep in mind that I can not reliably judge the accuracy of the color reproduction that way, but contrast, white and black level as well as maybe gamma. I did adjust the settings according to the test, but it turned out that the default settings only needed a reduced brightness to give the best results I could get from the monitor.

The panel performed well in the contrast test, with the color steps being fairly uniformly visible from 32 to 1 or 2. The white and black level were good but not optimal, with the last step not being clearly visible in both, and improving the one test via the black boost setting of course worsened the other. The gamma test – which relies more on subjective judgement is thus more error prone – was not ideal. The bars did not merge at around 2.2, but at between 2.3 and 2.4. Professional calibration might help here. But that result does not affect regular use negatively.

At first I did not notice any IPS glow or backlight bleed. A later more focused test in a completely dark room revaled some backlight bleed at the edges, particularly the top right corner.

That is a good result: Often enough, budget IPS monitors will have a lot of backlight bleed that is hard to ignore. Here, it is as minimal as to be unnoticeable in most situations. Even when watching a dark movie during the night the viewer is unlikely to be distracted.

For gaming, I started with my own impression while gaming with the monitor. To me, it performed well. I did not notice effects of bad response times, no smearing, also no noticeable input lag. That’s a big hint that the panel is at least good enough for casual gaming.

The initial response time test did suggest a relevant slow response time at the 0/128 and 0/192 transitions, with overdrive being in the normal setting. It was clearly worse than other IPS panels, like the Dell U2312HM I had available for a direct comparison, which was reviewed as a gaming capable allrounder. Consequently, the ghosting test did show enough ghosting to make me expect that it would be an issue for more enthusiastic gamers in fast esport games.

The blur busters motion test confirmed as much.

Without overdrive, you can clearly see ghosting behind the ufo. With overdrive on normal, the result is better, but there still is a bit of ghosting. Extreme overdrive leads to, well, extreme ghosting artefacts. Stationary photos of the effect don’t give an exact impression, but they do show that there is a change, and they show the afterimage left by the extreme overdrive.

Also compare the best result with the result of the Dell:

The Dell showed less ghosting, without even having an overdrive setting.

Overall, normal overdrive is the best setting. But even with that the panel does not seem to be particularly fast, slower than other gaming-capable IPS panel. But keep in mind that I did not notice ghosting as a negative while gaming.

The Visual Response Boost is a setting I discarded at first. Its negative effects are extreme. The prior smooth display output starts to pulsate as the monitor strobes the blacklight to insert black frames. It’s a really noticable and disturbing effect. Also, brightness gets reduced a lot. It gets locked to one level that is even lower than the low brightness level I’m accustomed to use. That’s on normal, on the extreme setting brightness gets lowered again.

However, it works. When looking at the blur busters motion test used in the section above the difference between VRB on and off is astonishing. If it’s on, the UFO gives the impression of being clearly visible in all detail. If it’s off, the UFO gets blurry again during the fast movement. Without the direct contrast you wouldn’t perceive it as very blurry, just as something moving fast, but switching between the two modes it almost hurts when you turn if off and all details of the moving objects seem to vanish.

For gamers the setting is worth a try. I assume that the brightness is too low to use it in practice, and that the output pulsation it introduces will lead to headaches. But some might be resistant to that and value the motion clarity it brings, and in some games the pulsating effect might be less noticeable. For me it’s sadly probably unuseable.

The Acer CB242Y is not bad. It does not dazzle with 144Hz and the included motion blur reduction will not be an option for most, that the speaker of my unit does not work is strange. But it has 75Hz, Freesync and in practice acceptable response times even when gaming. Colors and brightness are good, backlight bleed was minimal, viewing angles seemed perfect. Add to that the very good monitor stand and you have a compelling offer. This CB242Y is a valid option for those searching a cheap allrounder not too focused on gaming, it is a competent budget FreeSync IPS monitor.